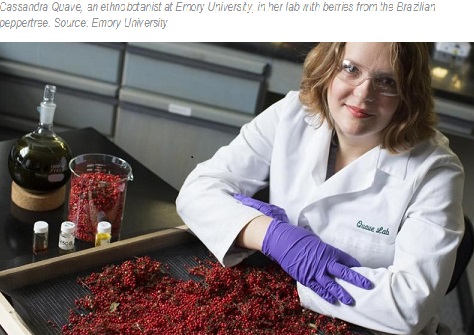 The red berries of the Brazilian peppertree -- a weedy, invasive species common in Florida -- contain an extract with the power to disarm dangerous antibiotic-resistant staph bacteria, scientists at Emory University have discovered.

The journal Scientific Reports is publishing the finding, made in the lab of Cassandra Quave, an assistant professor in Emory's Center for the Study of Human Health and in the School of Medicine's Department of Dermatology.

"Traditional healers in the Amazon have used the Brazilian peppertree for hundreds of years to treat infections of the skin and soft tissues," Quave says. "We pulled apart the chemical ingredients of the berries and systematically tested them against disease-causing bacteria to uncover a medicinal mechanism of this plant."

Read the full article and find out more about the potential of the red berries of the Brazilian peppertree at http://www.dddmag.com/news/2017/02/brazilian-peppertree-packs-power-knock-out-antibiotic-resistant-bacteria