Researchers in Australia are developing a simple test using blood samples to determine if patients with rare head and neck cancers are at risk of having their cancer spread to other organs.

According to the National Institutes of Health’s (NIH) National Cancer Institute, head and neck cancers make up about 4% of all cancer cases in the United States. Individuals who have been diagnosed with head or neck cancer are at greater risk of developing secondary cancer, such as in the esophagus or lungs, and the chance is higher for those who consume tobacco or alcohol products.

Just who is at risk for developing secondary cancers, or distant metastasis, has been the focus of researchers from Australia’s Queensland University of Technology. In a recent study published in the journal Nature Scientific Reports, the researchers say they’ve found that a simple liquid biopsy using blood samples may help predict which head and neck cancer cases may spread. In a study of 60 patients with head and neck cancers, the research team examined blood samples containing clusters of circulating tumor cells (CTCs) – which are shed from primary or secondary tumors and then circulate in patients’ blood – using a device developed by the team to separate single CTCs and CTC clusters from the blood of cancer patients.

Amyotrophic lateral sclerosis (ALS)- which is also commoly referred to as "Lou Gehrig's Disease" because of how little was known about it at the time of the baseball legend's diagnosis- is a classis motor neuron disease. Early symptoms include muscle weakness or stiffness, but as the disease evolves, the abilities to move, speak, swallow, and eventually breathe are rapidly lost.

Show Your Rare for

Rare Disease Day has become iconic as the global campaign for raising awareness of the impact that rare diseases have on the lives of patients and those who care for them.

A patient-led campaign, Rare Disease Day was launched by EURORDIS and its Council of National Alliances in 2008 and brings together millions of patients, families, carers, medical professionals, policy makers and members of the public in solidarity. 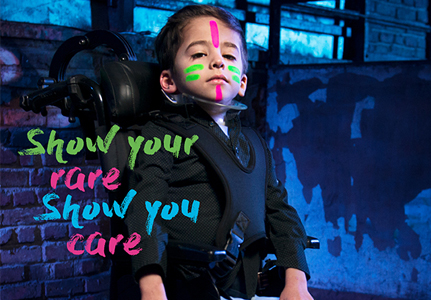 Get involved in Rare Disease Day 2018!

Everyone can get involved in Rare Disease Day, those affected and unaffected by rare diseases alike:

>>Show Your Rare on social media

Take part in the interactive #ShowYourRare social media campaign during the month of February - paint your face and share your selfie on social media to show your support for the rare disease community! See the EURORDIS team getting involved.

Prefer not to paint your face? See alternative ways to get involved, including printing this social media boardand holding it up in your photos!

Sean Hepburn Ferrer, eldest son of the late Audrey Hepburn who passed away from rare cancer pseudomyxoma adenocarcinoma, is Rare Disease Day Ambassador for the fifth year. See him getting involvedin the #ShowYourRare campaign.

Watch and share the official video (available in over 30 languages!). This year’s video pays tribute to the role patients play in research. The video features patients and family members, researchers and doctors who show their rare. Read their stories! Thank you to Publicis Health for their in-kind contribution to the campaign and Madame Peel for the production of the video.

You can also download the official Rare Disease Day 2018 poster, logo and social media banner to use at your events and online.

Everyone (organisations, companies, caregivers and researchers) can become a friend of Rare Disease Day to show support for the 2018 campaign!

Since Rare Disease Day began, thousands of events have been held throughout the world, reaching hundreds of thousands of people.

You can also tell your rare disease story on rarediseaseday.org.

2017 Was the Year of Gene-Therapy Breakthroughs

Gene-fixing treatments have now cured a number of patients with cancer and rare diseases.

It was a notable year for gene therapy. The first such treatments in the U.S. came to market this year after winning approval from the Food and Drug Administration. Meanwhile, researchers announced more miraculous cures of patients with rare and life-threatening diseases who were treated with experimental therapies.

Decades in the making, gene therapy—the idea of modifying a person’s DNA to treat disease—represents a major shift in medicine. Instead of just treating symptoms like the vast majority of drugs on the market, gene therapy aims to correct the underlying genetic cause of a disease. Doctors and scientists hope these treatments will be a one-shot cure.

Last year, we wrote that 2016 was gene therapy’s most promising year. But 2017 proved to be even bigger.

Scientists use CRISPR to turn genes on without editing their DNA

The revolutionary gene editing tool CRISPR-Cas9 is best known for helping scientists edit a strand of DNA more precisely and efficiently than ever before.

Now, researchers have demonstrated another use for the CRISPR complex: changing which genes are expressed without altering the genome itself.

For the first time, researchers at the Salk Institute in San Diego were able to use CRISPR to activate beneficial genes in live mice suffering from muscular dystrophy, Type 1 diabetes and acute kidney injury.

In more than 50% of test cases, the animal’s health improved after the CRISPR intervention, according to a study published Thursday in the journal Cell.

Previous work already had demonstrated that CRISPR could be used to alter gene expression in cells in a petri dish, but the new study represents the first time the technique has worked in a live animal, the scientists said.

The feat is significant.

“We moved this technique one big step toward human therapy,” said Hsin-Kai Liao, a postdoctoral researcher at Salk and co-first author on the paper.