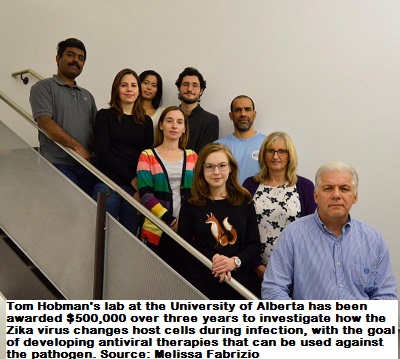 Zeroing in on The Zika Virus

For more than a year, Tom Hobman and his research team have devoted most of their waking hours to a headlong pursuit of knowledge about the Zika virus. Hobman, a professor of Cell Biology in the Faculty of Medicine & Dentistry is one of thousands of researchers across the globe racing to stop the rapid spread of the mosquito-borne virus that first came into the global spotlight in late 2015. His focused efforts have not gone unnoticed.

Hobman has been announced as one of three Canadian scientists who have received funding from the Canadian Institutes of Health Research (CIHR) for their teams to study the Zika virus. Hobman's lab has been awarded $500,000 over three years to investigate how the virus changes host cells during infection, with the goal of developing antiviral therapies that can be used against the pathogen. There are currently no antivirals or vaccines available to protect against Zika.

The three Canadian teams will collaborate with South American and Caribbean researchers who are funded by Canada's International Development Research Centre. Hobman's team will work closely with a group from the Oswaldo Cruz Institute in Rio de Janeiro, Brazil.

Read more at the original source: http://www.dddmag.com/news/2017/03/zeroing-zika-virus - read the complete article just clicking on this link